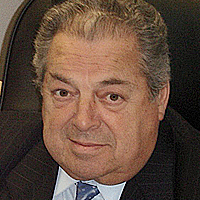 It is with great sadness that we share the loss of our CEO, Gerard M. Visco

Gerard M. (Jerry) Visco-of Holtsville passed away at the age of 89 after an impressive battle resulting from complications due to the COVID-19 virus on April 13, 2020.

Jerry is being remembered for being full of love, laughter and having lived a remarkable life that focused around family and business.

After serving in the Army on active duty from 1952-1954, he continued on in the Army Reserves from 1954-1974 where he achieved the rank of Master Sargent.  During his military career, Jerry also studied at City College and achieved a Bachelor’s Degree and his multiple Insurance Licenses.

He began his career as an Independent Insurance Agent in 1957 at a small agency on John Street in NYC.  Jerry started his own Insurance Agency, B & V Associates in Roosevelt, New York soon after. This later culminated into a cluster of agencies known as C.H. Edwards, Inc. where he remained as President and CEO until he retired in 2011.

Jerry was very active in the Insurance community having served all the chairs of the Nassau Independent Insurance Agents Association and finished that chapter as President in 1982.   In addition to his local board activities,  Jerry served as President of the Downstate Insurance Agents Council where he received many prestigious awards for his work. He remained active in serving the Insurance community on the State and National levels.  Jerry took on the role of IIAANY’s President serving from 1994-1995  where he distributed more than 40,000 Stay Alive, Don’t Drink and Drive bumper stickers as part of a campaign he developed as an education initiative. Jerry’s passion continues on and remains in the family as C.H. Edwards, Inc. located in Wading River, New York owned and operated by his son Steven and daughter-in-law, Denise.

Jerry is survived by his wife of 66 years Louisa, brother Michael, Jerry’s four children, Gerard Jr, Vincent, Jean and Steven, their spouses as well as his nine grandchildren and many nieces and nephews.

There will be a small family service at Pinelawn Cemetery on Friday, April 17, 2020.  Due to the circumstances surrounding Social Distancing and the COVID-19 virus, there will be no other service.  In lieu of flowers, the family requests that you consider a donation to a cause very special to Jerry and the entire Visco Family.

Jerry expressed concern on many occasions for the future of his grandchildren and for other adults living with developmental disabilities.  It was his wish to make the resources available to their caregivers and see these individuals supported to live life to their full potential.  In keeping with Jerry’s vision, The Visco Family is requesting any donations in his memory be made to Smile LI (Support My Independent Life).  Smile is 501(c) 3 non-profit organization whose mission is to support individuals with developmental disabilities live a self-determined, independent life.  Donations can be sent to SmileLI, 290 Hawkins Avenue, Lake Ronkonkoma, New York 11779.  www.smileli.org