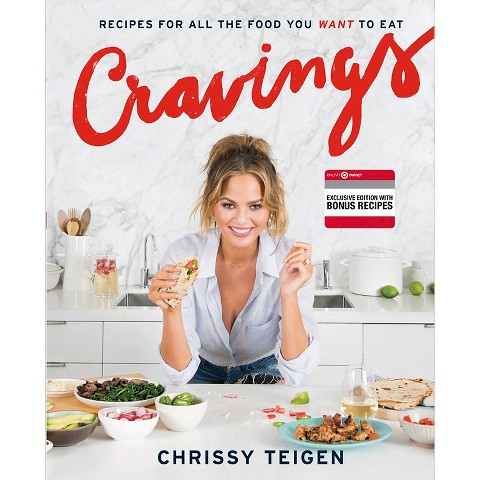 Cookbooks are usually the same old typical recipes and usually focus on eating healthier. Chrissy Teigen has just released a cookbook that will satisfy everybody’s comfort food. This superstar model has taken her favorite foods that she actually cooks and eats and puts them together in her cookbook which is titled, Cravings. You might be thinking, why and how does a supermodel have a cookbook that involves recipes that are considered unhealthy? Chrissy, feels that food is her outlet and has taken the next step from posting recipes on her blog to her book. “I always loved food, and I think I kind of needed an outlet. I didn’t want to just talk about modeling all the time and just be in the modeling realm,” she said. “I just kind of needed somewhere to just talk. I feel like my blog is a place where it is so positive and it feels like a real community. I will rant about ‘What am I doing with my life? I don’t know what to do’ and then I’ll turn that into hamburgers. ” Her blog that was the platform for her recipes before the book is http://sodelushious.com/ and is definitely something to check out.

Chrissy`s sassy personality really shines through this book. She aimed for it to be different from the rest and definitely succeeded. “I don’t want to seem like one of those annoying ‘I can eat anything I want anytime’ chicks. It’s just that I wanted to be honest in this book about the kinds of food I love, the kinds of food I crave,” she writes in the book’s introduction. Chrissy told Eater, “I didn’t want it to be a celebrity cookbook where you’re not sure if they really cook or if they just put their name on something. I wanted people to know that these are really the recipes that we love at home.” Many of these recipes she has even debuted on her Instagram and shows such as The Chew. Her book is broken into sections that make it very easy to find exactly the recipe you’re “craving”. The sections are titled, Breakfast All Day, Soupmaster, Salads (For When You Need Them), Noodles and Carbs, Thai Mom, Party Time, Sh*t on Toast, Vegetable Things, Things That Intimidate People but Shouldn’t, and Supper. I was definitely most excited for the Breakfast All Day section! My favorite recipe was the French Toast Casserole With Salted Frosted Flakes. Which one of these “cravings” recipes will you try?